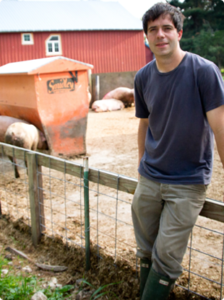 To fully understand how and why the pork you’re eating got to your plate here is a bit of history… For millennia, man has practiced the art of keeping swine.  The pig is an amazing protein sink where energy from plants and other foodstuffs not consumable by humans can be stored in the form of succulent meat until it is needed for food.  The prolific nature and adaptability of pigs to many areas of the world have led to their place of prominence in the modern food chain. This practice remained unaltered until the 19th century.  Now with the mass migration of people to cities fewer farmers started to keep more pigs and become more organized, soon the breeding of organized lines developed from the multitude of existing breeds to try to enhance some desired trait such as the amount of fat or muscle an animal had on its carcass, or the ability to exist in cold or hot climates. Although the Spaniards first brought pigs to North America, it was in the nineteenth century that pigs began to spread west into the United States with the Northern and Western European farmers move into Iowa, Illinois, and surrounding areas.  As corn became a staple in the Midwest, it wasn’t long until pig production evolved to be its alter ego.  Pigs were a way for farmers to utilize the corn they produced on their farms by turning it into pork which could be shipped back east for consumption in the form of meat.  This method of adding value gave birth to the Chicago packing industry which soon acted as the processor for most of the pigs produced in the middle part of the United States. By 1915, the number of pigs produced in the United States had reached its zenith, and would never change up to today.  Millions of farmers kept sows on their farms and were always counting the weeks until this or that bunch of fat hogs would be ready for market thereby enabling a stream of valuable cash to flow into that farm family’s budget.  Hogs became known as “mortgage lifters” and were the backbone of the economy of Midwestern agriculture.

World War II, and the Beginning of Industrialization, Antibiotics

Following the arrival of penicillin during and after World War II, farmers in the western world learned of the seemingly miraculous ability of this new silver bullet to eliminate sickness from their livestock.  It seemed even to promote growth, and over the next two decades more types of antibiotics along with penicillin became ubiquitous on any farmyard.  Farmers everywhere were using it not only as a method of treating illness, but eventually as a preventative measure included in all feed from birth to near slaughter as a kind of insurance policy. Soon pharmaceutical companies and their vested marketing interest were working hand in hand with local mills, manufacturers, and universities to develop new systems that could more intensively and more densely house livestock.  Why not have 1000 pigs, or 5,000 pigs in our barn?  Many farmers began to ask themselves.  The old limits Mother Nature imposed on the amount of pigs any one farmer could keep were apparently now abated by space age technology and miracles of the laboratory.

The Age of Confinements

By the early to middle 1960’s the “confinement barn” was spreading its way across the United States and the rest of the western world.  The technology was an intensive method of housing pigs in groups for growing hogs or single stalls for sows in pregnancy and during lactation.  All animals whether group or stall housed stood on concrete floors that had grooves cut into the floor to allow the waste to pass through into a “pit” which was constructed underneath the barn. This manure is kept liquefied and taken out to spread on the surrounding fields seasonally. Automatic feeding machines pass food from outside bins into the barn for the pigs to eat.  Automatic lighting and ventilation as well as heating are utilized. All aspects of this system allowed for maximization of scale on one farm.  In other words, lots of animals can live in a small space and minimal labor is theoretically required to care for these animals.  By now, preventative antibiotic use was the modus operandi of nearly any hog operation that was viewed as progressive in its community.  Soon some farmers began to build more and more confinement barns and get more and more pigs.  Other farms started to feel pressure from this industrialization effect, and many began to cease pig production if their financial position restricted such expansion.  Soon the farms that grew and used the new confinement system didn’t resemble the traditional family model any longer.  They became corporatized, and took control of still more pigs, and to satisfy their investor shareholders they often began to make special arrangements with slaughter plants that created new kinds of economies in the rural economic fabric, so the line was blurred between farmer and packer.  The idea of a daily cash market in pigs also went by the wayside.

The Other White Meat

By the 1980’s the trend of industrialization had reshaped the landscape of the Midwestern swine business. Most family and small scale traditional pig farms were gone.  Hundreds of thousands of pigs could be produced on a single site with multiple confinement barns and little labor.  Controversy began to arise over the impact on society and the environment from such farms.  Consumers on the whole began to eat less pork for a variety of reasons.  The pork industry as a whole decided on a new marketing plan for its product.  “The Other White Meat” was a term coined to coincide with the trend to eat leaner meat during this time.  In other words, consumers should eat pork because it was healthy and lean like poultry.  Packers began to require that pigs be leaner and leaner.  A few new breeding companies were formed to genetically select new kinds of hybridized pigs for leanness.  Many traditional breeds of pigs that have been in existence for centuries fell out of favor and nearly into extinction as farmers were given this ultimatum from the packing plant.  The overall quality of pork declined as consumers were give no choice but to buy this new leaner meat with less red color, less intramuscular fat, and degraded eating quality.

In the 1990’s the organic food movement began to take hold in parts of Western Europe as well as the United States.  Consumers began to awaken to the impact of their spending choices related to agricultural  and food issues, and a keen focus on holistic living and health provided a new market for organic and natural food.  It wasn’t long before some in England began to tout the importance of traditionally reared livestock as an attractive throwback approach to what had now become the dominant conventional method.  People suddenly awoke to the past and memories of “good tasting” pork from farms with methods that were less controversial.

The Outdoor System from England

Farmers began to experiment with the historic systems in this new “post modern” setting and learned how to deal with modern concerns over availability on a weekly basis, (traditionally pigs were only available seasonally and much pork was salt cured and preserved for winter months) as well as clean fresh meat in packaging that met modern food safety standards. After a few years of trial and error farmers developed a good system to house pigs outdoors in any season and methods to organize the reproduction of pigs to ensure that market weight mature animals could be ready for slaughter at any time to offer fresh meat to the eating habits of modern consumers in grocery stores or restaurants.

Setting Up the Outdoor System in Iowa, a Learning Experience. 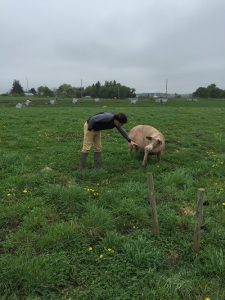 In 2003 a group of niche pork enthusiasts sent a contingent of farmers, university researchers, food industry specialists, and meat scientists to Northern Europe to study the production of niche pork there.  On this trip, the English system which at that time had spread into Denmark and Sweden was viewed for the first time.  The promise to add organization to the traditional methods of outdoor pig production that were crying out for improvement was noted by participants. In 2004 after initiating contact with a farmer in Denmark, Becker Lane Organic Farm started to make changes in its plan of production for pigs.  The first change was an ideological shift away from the traditional fear of winter birthing of small piglets.  New engineering and manufacturing procedures that weren’t available prior to WWII now allowed sows living outside to give birth year round thanks to the galvanized steel farrowing hut.  This strong and well insulated house for the sow preserved most of the sow’s body heat in temperatures as low as minus 20 Fahrenheit.  They could be placed in pastures and filled with straw, and the insulation worked to keep the hut warm in winter and cool in summer.  Now farmers that embraced the traditional views on outdoor pig production but were restricted to spring and fall birthing of piglets (farrowing) had an option to produce pigs year round thus being able to offer fresh meat continually to interface more easily with the needs of modern grocery markets and restaurants.

Getting the Food to the Customer

Challenges for independent farmers to create pathways that allow the flow of food produced with attributes outside the commodity food chain to customers who share the value of those attributes is a great challenge.  Our current food supply chain is not designed to allow small quantities of food to get from farm to plate without passing through many middle gatekeepers who want to take the identity from the product and sever this philosophical bond between farmer and consumer.  This reality combined with the degraded infrastructure of the slaughtering industry give only a few options for farmers to get the pigs butchered and sent on to restaurants and grocers around the country.  Becker Lane has created relationships with a quality slaughtering and butchering facility that is also using organic and humane methods.  As more consumers choose organic meat, we will hope that more processing options become available for farmers and their customers.